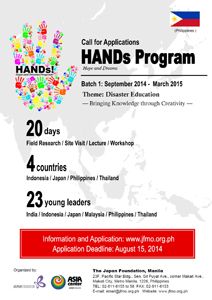 The Japan Foundation Asia Center launched The Hope and Dreams (HANDs) Program which is a bi-annual youth exchange project, aiming to nurture a sense of common feeling and coexistence as a community shared by the people in Asia.

The HANDs Project provides platforms to have dialogues and exchange of ideas among youths in Japan and Asian countries, and further promote the development of a network among young leaders as well as collaborative efforts among them, especially in the field of disaster education which is one of the most pressing issues in the region.

Participants from Indonesia, Philippines, Thailand, Japan, Malaysia and India will be given the chance to join the study tour in Indonesia and the Philippines (September 25 – October 5, 2014), Thailand and Japan (January or February 2015, 10 days) to observe the various practices of disaster education in the respective countries. At the end of the study tour, the participants will develop proposals on projects relevant to disaster education and will be given the seed funds to implement the plan in the second year (April 2015 – March 2015).

Permanent link to this article: http://www.cosmopolitalians.eu/hands-program-disaster-education/